Review: The Hate U Give (THUG) by Angie Thomas 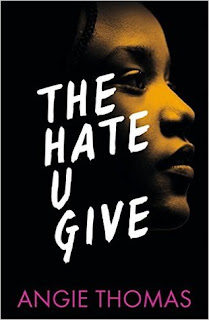 The Hate U Give by Angie Thomas

Excuse me whilst I go hunt for some tissues 😢

A very thought provoking and amazingly written debut novel from Angie Thomas, who has captured a lot of social, racial and political issues which we still face today. Inspired by the Black Lives Matter movement, this a powerful and gripping YA novel about one girl's struggle for justice.

Meet Starr, a sixteen year old who lives in two completely different worlds: the poor neighbourhood where she was born and raised, (I know you've just sang part of the Fresh Prince theme tune!) and her posh high school in the suburbs. Apart from the struggles of keeping her two worlds apart, and hoping her dad doesn't find out about her white boyfriend, Starr's live is pretty average until she witnesses the fatal shooting of an unarmed teenage African American boy by a police officer. The differences between her two worlds are brought painfully to light, and friends show their true colours. Being the soul witness to the shooting also puts a mark on Starr's back. Speaking up could get her killed, but keeping quiet can be so much worse, especially when it comes to fighting for justice not only for someone you know, but for all those who have been wrongly accused or unjustly killed by those who swear to protect.

I have no complaints about this book, or the writing style. Is there things that could of been done differently or better? Possibly, but they didn't jump out at me, nor did they interfere with the flow of the story. Not only does Thomas highlight the struggle between authority and those of a different racial background, but also the difficulties that surround those who are in a mixed race relationship. Whether it's having to keep it from your parents, to strangers in the street who may disagree and make you feel uncomfortable. I look forward to seeing more from Angie Thomas in the near future.

Email ThisBlogThis!Share to TwitterShare to FacebookShare to Pinterest
Labels: #YAreadsNT, Angie Thomas, Review, The Hate U Give