I am currently working within my local council's libraries, and the wonderful Team Leaders where I work gave me the job of taking care of the Graphic Novel, Manga, and YA section.

Now all three of these areas struggle to get issues so I knew I was going to have my hands full. Luckily I read quite a bit of YA and manga - and occasionally a graphic novel - so I at least had some idea of what might work. First move was to put the YA and manga together, a bit like how Waterstones in Newcastle have it set up. This worked amazingly! Especially for the manga as issues went up within the first week or two, and are thankfully continuing to rise.

This left me in a bit of a predicament however. I mean, how was I meant to top that?

Ideally creating a separate space for Young Adults would be fantastic, however due to limited space I can't do that, so instead I thought about doing a display to try and see if this would help. Originally it was meant to be one title a month being displayed, however due to some rule or such, all the books had to be displayed at the same time. I am grateful that this has been the only bump in the plan. As a compromise we're doing a hashtag on Twitter #YAreadsNT for each book.

September's book is The Hate U Give by Angie Thomas.

October: Three Dark Crowns by Kendare Blake
November: Night Shift by Debi Gliori
December: Contagion by Teri Terry
January: One of Us is Lying by Karen M. McManus
February: Warbringer by Leigh Bardugo
March: After the Fire by Will Hill
April: Ink by Alice Broadway 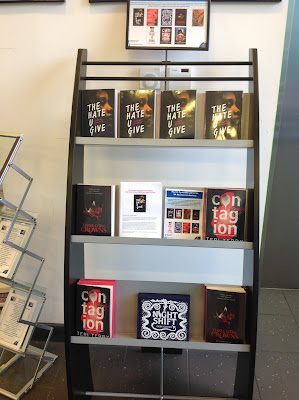 Along with the hashtag #YAreadsNT, I will also be posting my reviews on the last Friday of each month for the corresponding book.

Please feel free to join in using the hashtag, even if you are far from our branches.

I look forward to seeing what you think of each of books either on Twitter or via the comments section. So far the idea seems to be working as the above stand is pretty much empty!

I am still waiting fpr a few of the titles, but hopefully the awesome delivery guys will being me some boxes any day now 😊