British Book Challenge & Giveaway: The Exact Opposite of Okay by Laura Steven 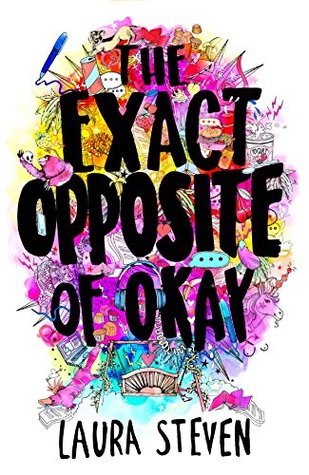 I really enjoyed reading Izzy's story, she's funny and pretty down to earth. Laura Steven has done an impressive job of exploring how females are taught one set of rules, whilst males are given another. For example a male who sleeps with multiple girls is hailed as a stud, & is praised for his sexual conquests. Yet if a female acts in the same way she is seen as a slut, & condemned for her conquests. This can have very damaging consequences, especially for young females, who have been programmed from a very young age that their only value is their looks, & how much sex they're having, or not having. It is quite possibly one of the biggest issues within the whole male/female divide, yet not the most important one & am not sure I completely agree with the message within The Exact Opposite of Okay.

Izzy is a young adult who was orphaned at a young age, & lives with her Gran in a pretty run down state of America. Her two best friends, Ajita & Danny are always there for her until puberty & all it's joys descend a upon them. Ajita is first to notice that Danny has a crush on Izzy, who in no terms lets him down easily. Her way of getting the message across, sleep with two dudes in one night whilst at the same party. Not exactly the best move to make when you know one of your best friends has feelings for you. Izzy's reasoning for this is witnessing Danny snogging another girl & more than likely trying to make Izzy jealous. This was the first flaw in Izzy's character that really stood out. Not her sleeping around, but her complete lack of care for her friends feelings, & it gets worse when she then outs Ajita's sexuality to one of the "fuckboys" she's hoping to have a relationship with via text. She even knows what she is doing is wrong, but still does it anyway, with no regards to Ajita, who hasn't even been able to admit it to herself yet. Totally not cool. Although I disapprove with her behavior, she most certainly doesn't deserve what happens next.

A website detailing her "sexploits", her nude pictures leaked online, being slut shamed, losing a friend (albeit briefly) due to her texts being leaked & worse of all, it all goes international due to a senators son being involved. Izzy's Gran is amazingly supportive when she finds out what has happened, & doesn't judge Izzy at all. She even takes on the headteacher, questioning why her granddaughter is being subjected to bullying & pervy teachers. Sadly cos the school is super conservative, all this continues on whilst the male counterparts who were also outed on the site are given special treatment. This is highlighted when Izzy's entry into a comic sketch competition gets revoked, as the judges believe it'll bring "unwanted attention" to the competition. On the other-hand the senators son who was photographed having sex with Izzy, gets into his first choice University. I would of thought a University of high prestige would be more concerned about it's image then a comedy sketch competition, but hey ho. There is one teacher however who does help Izzy, & that's her very cool drama teacher.

After going through all of this Izzy does manage to pull through, & surrounds herself with friends who are there for her. There's also a hint of a serious relationship on the horizon with one of the "fuckboys" she promoted to boyfriend potential. If you're wondering who set the site up, then I suggest you read the book.

I would love to hear their side of story, as I feel as though we've become so focused on how negatively females are treat by males, that it seems we're forgetting how badly females can also treat males, & other females. This in no way means I agree with the persons actions, just that we should all be looking at how we treat one another regardless of sex. Yes this book highlighted slut-shaming, but what it didn't mention is that us females, we're more to blame for this. We slut-shame other females so much more than males slut-shame females. I know this first hand. In my group of friends we did it, & in other groups too, along with other girls at school, & it was always other girls shaming another girl. Laura Steven did an amazing job on bringing up revenge pron & how damaging it can be. I was shocked to find out how in a majority of states & countries there are no consequences for those who use it as a means to sabotage another person. What niggled at me was should we not be encouraging young men to not sleep around a lot, instead of telling young women to sleep around a lot? I don't see anything positive about either sex having multiple different sexual partners. Being confident in yourself, and sleeping around a bit yes, but not to the extent that Izzy is portrayed to be doing in The Exact Opposite of Okay. For one, there's the risk of sexual diseases, another is unwanted pregnancies, & then there's the effect it can have on future relationships. The majority of people don't feel comfortable being with someone who has had more sexual partners than they have. It's uncomfortable because you'll question them & yourself. I've had partners in the past who'd been with more people than me, & I constantly doubted if I was really as good as they were saying, or if they were thinking about about so & so they'd hooked up with a year a go. Getting laid can be easy, but finding someone to share yourself with is hard & takes effort. So yea have sex, but think about the long term & what you want out of life, & for gods sake, don't lower yourself just cos guys are out having sex nearly every other weekend. That shouldn't be your reason to enjoy something that is imitate. It's like not following a fashion trend, & can have it's dangers & consequences. Most importantly though, please read The Exact Opposite Okay. It's so worth it, & I'd love to your thoughts on it! As you can gather it certainly made me think & question our society & the differences between men & women.

Thank you NetGalley for granting my wish for an early review copy.